August 4, 2017 In Dramatherapy By Lou Ghirlando

Tackling the causes of eating disorders can be an arduous task but an approach that mixes therapy with drama and creativity is making it easier. “Dramatherapy is a form of healing that uses creativity including drama, games, improvisation, music and movement,” explains Kate McCormack.

The senior dramatherapist at the UK’s Bethlam Royal Hospital is in Malta to give a public lecture on using dramatherapy to treat eating disorders.She is also holding workshops as part of Embodying Selves, a local project designed to increase awareness of the link between eating patterns and the relationship with one’s body.

A dramatherapy session has three phases: the opening exercise followed by a main activity exploring the world of imagination, ending with reflection on significant moments of the session. Taking part in any form of therapy can be daunting and Ms McCormack, a dramatherapist for the past 18 years, explains how it works in dramatherapy.
“Our work is very client-centred. The aspects of play in dramatherapy are developed at the client’s pace,” she said, stressing this approach is imperative for success.

Ms McCormack also applied this method within a closed-group environment, something she says can be hard to come by.“Most of my groups are open with constantly changing membership due to different levels of illness.
“I have had the unique opportunity to work with a closed group – the same members each week. They created a story using what is called the six-part story structure, which will be explored in one of the workshops this weekend.
“Each member found a story, piece of music, or poem that had clear parallels with their own stories and each week one person directed others in an enactment of their story. This allowed them to have control over how the story was told.”

Creative arts hold a central position in this form of therapy, allowing for a reconnection with the body through creative expression. “The strong, non-verbal component in dramatherapy is crucial. The body is given the opportunity to be part of the healing process, which can be very effective for those with an eating disorder,” said Ms McCormack.

Lou Ghirlando, a dramatherapist and designer of Embodying Selves, agreed: “Dramatherapy offers a developmental process that works towards integration of the body making it highly relevant to treatments of eating disorders.
Creative arts therapy has potential with children but can also be effective for adults “I designed the project on inspiration from psychotherapists and dramatherapists who speak about the connection between emotional well-being and eating patterns.”

Ms Ghirlando, a council member of the Creative Arts Therapies Society, believes more awareness of the benefits of dramatherapy for adults is needed. Many wrongly assume that drama, play and creativity are only for children, she added.“There is a growing awareness of the potential of creative arts therapy, particularly with children. I am working towards drawing attention to the fact that it can also be effective for adults.”

Article by Claire Caruana as seen on Times of Malta

Kate McCormack’s visit was made possible through the project Embodying Selves funded by the Malta Arts Fund, Malta Council for Culture and the Arts, 2014. 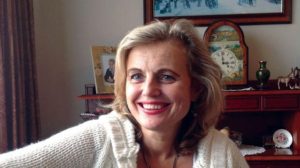